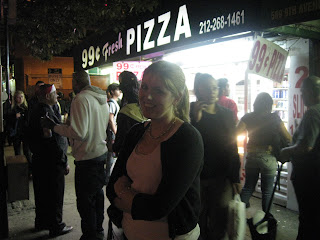 Thursday, I traveled. Finally! I grabbed my passport and I headed to Midtown West, affectionately known as Hell’s Kitchen, a throwback to the neighborhood’s slum days.

I was en route with friend Hillary to see the new show “Saved” based on the movie of the same name. We all remember Mandy Moore’s stellar performance as a good little Christian girl whose friend gets pregnant.

But I was hungry. What does one do after spending money on a show ticket? With literally no cash and not enough time, one looks for the cheapest food possible.
Thank the heavens for 99 Cents Fresh Pizza on 9th Avenue between 41st and 42nd street. This little storefront pizza shop serves up some of the city’s cheapest pizza. It’s certainly a departure from the kind of pizza you get at any of the Ray’s, Ben’s, or Patsy’s. 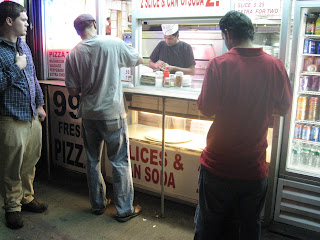 The Middle Eastern men behind the counter don’t really pass for Italians, but they know what they’re doing. The pizza is by no means bad. And at less than half the price of most pizza joints, who can complain?