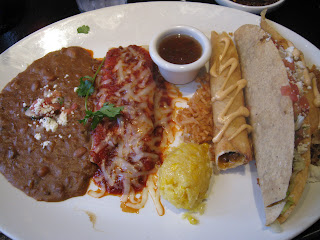 Time for another Midtown adventure! This time, instead of pizza, it was Mexican. Chevy’s, the Times Square gem on 42nd Street.

Today, the first official day of summer according to the thermometer, I would have been satisfied with the gigantic frozen margarita that Chevy’s serves up. But pal Kennith and I decided that food wouldn’t be a bad idea.

Kennith visits this place nearly every week (the entire staff knows him!), so I listened to his suggestions. The Fresh Mex Combos let’s you choose 2, 3, or 4 items from a varied menu of options. It was difficult to choose – so I didn’t. 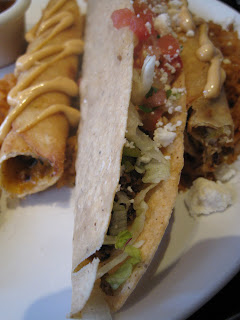 Per Kennith’s command, I got a cheese enchilada, a crispy flauta, and a hard beef taco. And boy was I glad I listened to him.

The flauta was the best decision ever. A log of chicken deep fried in a tortilla with some sort of pink sauce and a mind-blowing brown dipping sauce (think salty duck sauce) was enough to satisfy me. I couldn’t place any of the tastes, even after dissecting the flauta, so I sat back and enjoyed. 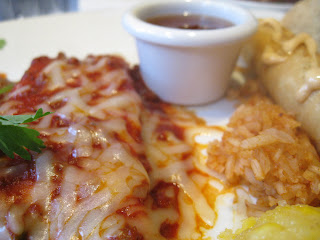 The crunchy beef taco with red onion, tomato, and lettuce was a blast of flavor dominated by the onion. The cheese enchilada was soft and gooey, covered in tomato sauce and cheese.

As if that much food wasn’t enough, there was a side of refried beans that hit the spot, and some sort of corn hash that was hearty and almost like a potato in consistency, dotted with kernels of sweet corn. 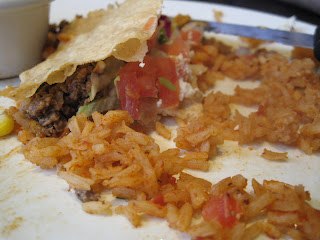 By the end of the meal, only remnants of the taco remained – a testament to how much food they actually served. And for about $25 per person for all that food and the vat of margarita, well, that ain’t bad.

And even if you don’t enjoy Mexican food, it’s definitely a fun place to watch the tourists and revel in your New York address.