Tastes of Home Part I 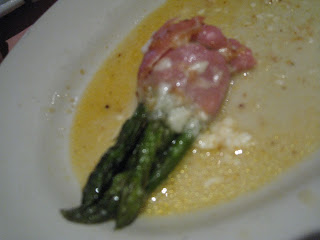 A weekend trip to the suburbs of Philadelphia proved to be more than another feet-dragging trip home. With one eye on satiating my appetite and one on reporting back the culinary gems that can be found, I was ready.

Taking the illustrious NJ Transit to Hamilton Station (at a mere $20.50), I was at the gateway of suburban Philadelphia. None of that $100 Amtrak business for me. Dad picked me up at the train station and drove a mere 25 minutes to the destination -- food.

The results of the voyage were astounding. I re-experienced two extremely familiar establishments in an entirely different way.

First, the restaurant LaStalla, my old employer, was the lunch destination Saturday. This Italian hotspot in Newtown is the suburb’s best attempt at fine dining, with lukewarm success.

The service, extremely familiar to this ex-employee, was standard, friendly, and patient as we struggled to understand the concept of “family style” eating. Once we decided to order family-style pasta and our own entrees, the food came out hot and fast.

Asparagus rollatini, a favorite appetizer of mine (though I never actually sat down at the restaurant to eat it, I usually ate standing up behind the bar…) never misses the target. Crisp spears of asparagus wrapped in prosciutto and fontina cheese and were baked in Romano sauce, what I assume was a fancy butter. Delectable and savory.
The appetizers are apparently meant to set your expectations high, but the meal hit a plateau. Maybe it was our poor choice. A fresh and standard Caesar salad tided us over until the pasta course. Nothing exceptional. A huge dish of pasta with cherry tomatoes in a light red sauce came next, accompanied with generous amounts of parmesan cheese. Simple dish for simple tastes – it pleased. No wows. 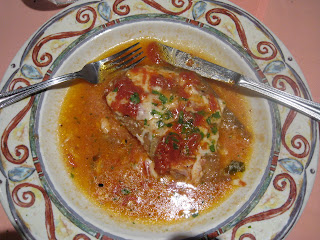 Then the fun came out. My chicken Sorrentino, with a layer of eggplant fused to a piece of chicken, was covered in mozzarella cheese and plum tomato sauce. It was delicious, and filling after all of the other food and bread (which I skipped – it had seeds on it, ew). A filling meal for more than $20 a person. As a stand-alone, however, the chicken would have left my tummy
rumbling.
So sitting at the tables and not serving patrons drinks was a refreshing experience. But it made me thankful for the next gastronomic experience that awaited me on Sunday…more to come.