August 16, 2008
It may be the culinary capital of the world, but after 6 weeks, I learned that Paris isn’t all confit du canard and steak frites. In fact, my brief sojourn was actually devoid of all that I think to be “French,” replaced instead with falafel, couscous, and beer. Of course I’m not complaining. 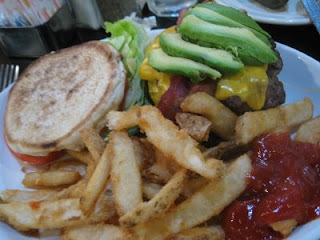 That said, my return to America has been the beginning of real vacation eating for me, and I’m loving it (as I snack on pizza pretzels, utterly American). My arrival in New York was highlighted by much American food, including burgers at the Stand on 12th Street (with mayo, bacon, and hard boiled egg). I also visited Brother Jimmy’s by Penn Station for my first ever “po’ boy” sandwich. Fried shrimp and Cajun mayo? Sign me up.

And in keeping with the heart-healthy theme, I capped my week in New York with lunch at Silver Spurs on Broadway in the Village, my favourite diner in town. I devoured the De Senator burger, a quarter pound of beef, avocado, bacon, cheese, lettuce, and tomato on an English muffin (see photo). I still feel like I need to go for a run several days later to work that off.

Nothing in Paris compares to this wanton mass of food, which, I must add, is too big to wrap my mouth around. And then there are the French fries that I am convinced are beer battered. You can’t find that in the Marais.

It’s nice being surrounded by so much American food, but some differences are marked. Restaurants don’t always provide water and bread. Tipping is again a concern. Additionally, menus are all in one language, for better or worse. I’m back, I suppose!