Milk Flan to the Rescue! 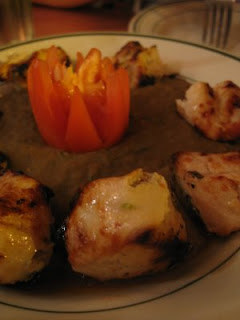 I’ve had a lot of falafel, a lot of Mediterranean food, a lot of pizza – but Moustache in the West Village surprised me. Tucked away on Bedford Street, between Grove and Barrow, this tiny restaurant specializes in all sorts of Mediterranean dishes. Nothing super fancy, but definitely classy.

There was a wait, even if just a few minutes – clearly the locals liked this place. The service was quick and polite, and when the waitress put her hand on my shoulder, I was in love. So homey! We ordered baba ganoush with whole wheat pita for an appetizer. It was savory and abundant, to say the least, with three tasty olives garnishing the middle of the plate.

Then onto the entrees: a chicken kebab platter and a Moustache pizza. The chicken was 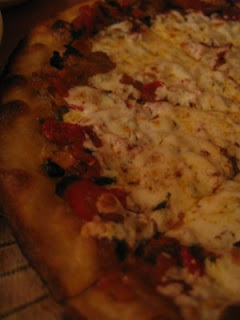 delicious, swimming in a puree of lentils, cilantro, garlic, and I THINK lemon juice. The chicken was juicy and the puree was phenomenal with many layers of flavor developing at each taste.

The pizza was a very thin crust topped with tomatoes, onions, roasted red peppers, and mozzarella cheese. Each little slice was amazing and satisfying, mixing traditional Italian pizza with something spicy and exotic. The menu said it was just parsley and chili, but I’m still not convinced. It was more like magic, I’m sure. 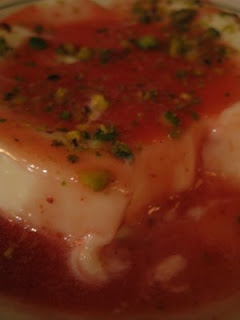 But the happiest part was the Muhalabia for dessert, a milk flan swimming in a red berry sauce. The sauce, I’m pretty sure, was strawberry, not raspberry as I initially thought. But the flan was loaded with sweetness and a jasmine perfume that I adore. Add some crushed pistachios on top and you arguably have the highlight of the meal.

With entrees hovering a little over 10 dollars, the price was right. And with attentive service and extremely memorable food, the entire package gets two thumbs up for this neighborhood treasure.