Concert of a lifetime -- and currywurst to boot!!! 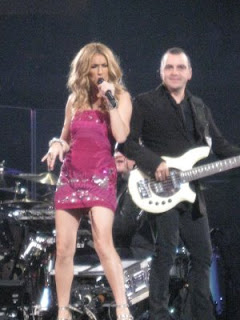 Oh, and as if Joe Biden wasn’t enough celebrity for one day, Friday culminated with a trip to Philadelphia’s Wachovia Center for the concert of a lifetime. Yes, it was the one and only Celine Dion, the pride and joy of Quebec. She made a quick stop in Philly during her World Tour. To sing and to see the world -- a dream!

A 2007 Christmas gift to the family, the tickets were, dare I say, good seats. Seated on the floor (with mother and Sassypants Suzy), we were reveling in the crooning of one of the world’s greatest voices. You may not like her music, but the girl’s got pipes. And she hasn’t been to Philadelphia in 10 years! What gives?!

But what a show!

Once home (we left reluctantly), Suzy and I tried to continue the magic (an impossible feat), but we came close as we cooked ourselves a late night snack. We browsed the kitchen. Hotdogs, curry powder, paprika – “OH! Let’s make currywurst,” we decided. Inspired by Celine’s world tour, we concocted the Berlin treat, reliving our Germany trip last March.

It was Suzy’s first time since Berlin. Eating currywurst, that 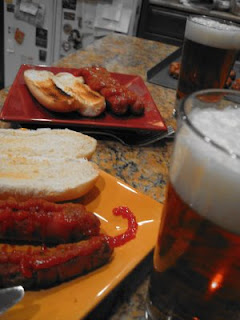 First, we fried up some hot dogs. Not quite bratwurst, but nearly identical. Then we smothered it in ketchup, sprinkled a liberal helping of curry powder, and finished it with a dash of paprika. We toasted up rolls (brochen, in German) to soak up the extra sauce. Sounds basic, and it is. But Germans, most notably Berliners, LOVE the stuff.
And of course, you serve it up with a beer. No German beer, but Yuengling is really good!

I wonder if Celine had any during her German leg of the tour???