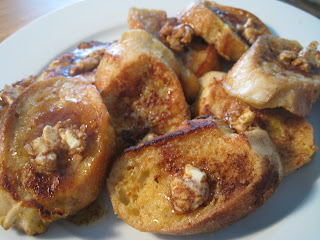 Who said French toast was an American food anyway?  Pain perdu, French for "lost bread" can be equally enjoyed here in Paris.  Of course, only Americans it seems enjoy it for breakfast, but who cares?
Last night I restrained myself from eating the entire baguette and saved some for this morning.  Slightly stale and unappealing to eat, I sliced the demi-baguette into about half inch slices.  This bread would not be lost!

Then I whipped up a mixture of eggs, milk, sugar, cinnamon, nutmeg, and a pinch of salt to soak the slices in.  After soaking the slices in the liquid for a few minutes, it was time to Frenchify the toast.  In a liberally buttered skillet (think Paula Deen), I placed each slice until it was a golden-ishy brown, and then popped it in the oven to finish up with a sprinkle of salt on top to make the crust that much sweeter. 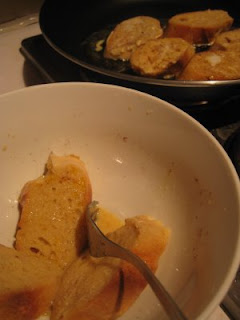 The final touch was a brown sugar and cinnamon butter that I stirred together while the toast hung out in the oven.  Once the toast was was all warm and delicious, I dabbed a dollop of the sweet butter on top of each morsel of bread where it began to melt and dribble all over the plate.  It tasted familiar, yet decidedly French. I’m convinced it was the butter.  It’s just better here!

French toast in – what a novel idea.