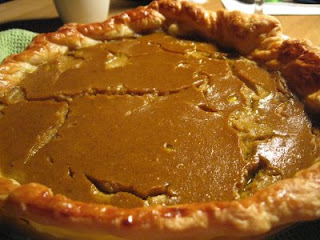 I needed a fix, and I needed it now.  But was not serving up pumpkin pie–ANYWHERE.  So I took matters into my own hands.  I printed some recipes, approximated some measurements, and took the plunge.

The hardest part (well, not really hard) was finding canned pumpkin.  Thanks to Bon Marché, one of the classy department stores in , I was able to find a section in the gourmet grocery dedicated to the and its products.  I didn’t recognize any of the brands, b

ut I found canned pumpkin for about 3 Euros all the same.  Naturally I bought 3 cans.

The pie was surprisingly easy to make.  I used a few different recipes to accommodate changes in ingredients (example, there is no evaporated milk here, just a much sweeter condensed milk).  But I mixed the eggs, sugars, milks, salt, cinnamon, nutmeg, and pumpkin together until it was a creamy consistency. 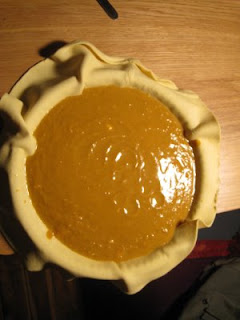 The next hurdle was the crust, since doesn’t sell pie shells like they do in the .  I had to go buy a metal pie tin (reusable at least!).  Then I bought a rolled-up tart shell that you lay into the pie pan.  I filled it up with the mixture, gave the crust a quick egg wash, and popped it in my Celsius oven.  Thank you, Google for converting 350 degrees Fahrenheit to Celsius.

The result was a delicious-looking golden pie and an apartment perfumed with cinnamon and nutmeg.  Amazing!  The next morning, I toted the pie through the Parisian metro where I received all sorts of stares of confusion.  Pie, in the metro?  What can this mean?