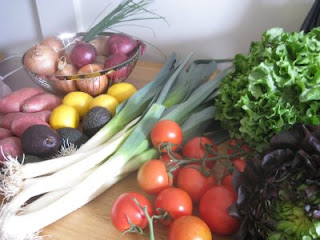 So it was a Sunday. And like every Sunday in France, the world is closed except for my trusty grocery and the FRESH PRODUCE MARKETS. When given the choice between the two, is there really a question?
So after I left the grocery store (kidding!)...I hopped on a bike around 11 AM, and in Paris the trusty Velib, a sort of public bike system, is found everywhere.  It took me about 20 minutes to wind through lazy residential streets, running redlights and zipping past pedestrians to reach my new favorite market, the marche d'Aligre.  Located down the street from Bastille, the neighborhood, not the fortress, this bustling market has reportedly some of the lowest prices for some of the best produce.
The reports are true!
I managed to buy all of this fresh (read: FRESH) fruit and vegetable items for under 10 euros.  Red onions were my splurge item, at about 2 euros 75 cents a kilo.  I only  bought three, so as not to break the bank. 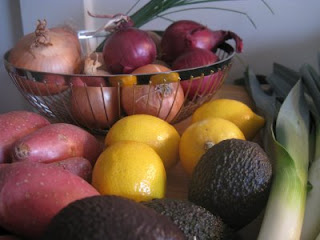 But what a riot!  I walked up and down through the crowds, pushing past stupid parents with strollers and nearly knocking over slow old women and their pull carts.  Frustrations aside, I loved it.  I bought some lettuce from this guy ("Mangez salade, jamais malade" = Eat salad, never get sick), some potatoes from that guy, and some leeks from the other guy.
I feel good looking for local items, until I realize that not even the vendors themselves come from France -- unless they were all raised speaking Arabic, a very real possibility.  But the tomatoes were grown in the south of France, and the leeks were marked French.  And I didn't mind the Moroccon avacados.  It was nice to speak French with another (presumably) non-native speaker while getting such a great price on the week's nurishment.
Now I just have to see if I can eat it all before it goes bad!