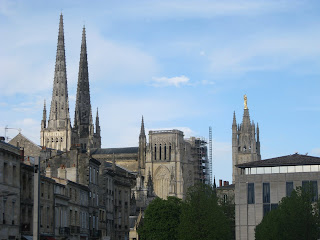 Bordeaux, France. Home of old buildings, fountains, and most importantly, world-class wine. The food's nothing to sneeze at, either. During my weekend to the southwest of France, I took to the table with two new German friends for a small feast bordelais style (that's the adjective for Bordeaux).
At Chez Maman, just off rue St-Catherine, the longest pedestrian street in Europe supposedly, we hunkered down for a prix-fixe at just 15.50 euros. The choices were difficult but check out what I settled upon. 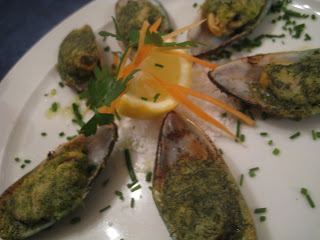 For a starter, moules farcies, stuffed mussels loaded with herbs like parsely and dill. They were served on a bed of sea salt that I had to refrain fron licking up with the bread. 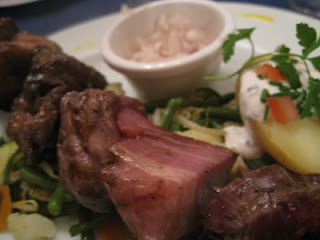 For my main dish, I had a brochette, essentially a kebab of meats including beef, duck, and a ham-like substance. It was served on top of a medley of vegetables (deliciously prepared in butter and perfectly cooked). I chose the shallot sauce, crue, which meant I just had a small side of diced shallots. But with some salt and pepper, it was all that the freshly cooked meat needed. We could watch it be cooked over the fire oven not 5 feet away from our table. 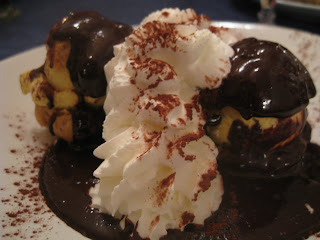 And then for dessert, my favorite part, I chose the chocolate profiteroles. Small balls of dough stuffed with vanilla ice cream were topped with a generous flood of liquid chocolate and Chantilly, or whipped cream. It took me a while to eat it, especially as I looked with sad eyes at my German companions who had chosen the creme brulee, which was not as copious or chocolatey.
Accompanied by a bottle of local Bordeaux wine (AOC Bordeaux, and after our wine tour that afternoon, we knew exactly what this meant!), the meal was divine. It was only made better by the shot of vanilla rum that the server brought us at the end. Hey, why not, right?