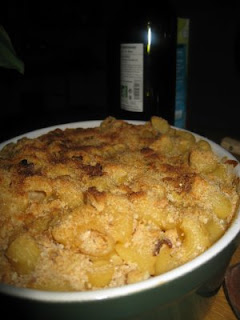 Hello dedicated readers! Dry those tear stained eyes because the days of Traipsing Tastes have returned!  I had to take a small hiatus to cook, for real, in a restaurant (gasp) but now that I have quit, it's back to the fun stuff.
But oh the things I learned!
You can now say you know a former Parisian chef.  I cooked brunch on the weekends at a local eatery, where all the cool people went.  Granted, I wasn't doing haute cuisine, but I definitely improved my vocabulary in addition to earning a few battle wounds from the oven.
More on that later, but for now, take a look at the things I've cooked up lately.  America meets France once again as I crave mac and cheese.  No powdered cheese here.  Instead I prepared some diced onion and garlic in melted butter, and then melted up 4 of my favorite cheeses into it.  Once it was good and gooey, added the cooked pasta and got it all nice and coated.  The special touch was the fried bacon that I then tossed in -- call me a fatty.   I dumped it into a baking dish and topped it with some bread crumbs and butter before tossing it into the oven.
A note on bread crumbs:  they don't really exist in France.  Instead, I had to buy some cheap brioche, basically stale bread, and mash it up, seasoning as I desired (salt n peppa baby).  Way more fun than buying a can of them!
A note on bacon:  it doesn't exist in France like in the States.  I buy poitrine fumée, which looks the same and almost tastes the same if prepared correctly.  I like to fry it slowly in a touch of oil over medium heat until the fat gets crispy.  Patience is required, but rewarded.
Once it was baked, I had a crispy top with a melted delicious interior that tasted divine.  Talk about good ole American fare.  It's a challenge to get a taste of home without having your mother mail you American goods, but it's not impossible!