Whip out the chopsticks, it's dessert time... 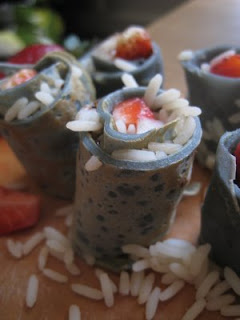 So I have a lot of strawberries from yesterday's market run, and I wasn't entirely keen on cooking more muffins or cakes.  I wanted something different.
So I figure why not go crazy and make something off the wall, like sushi.  Well, dessert sushi.  The idea isn't exactly from the outer rim, but it's not something you'd find at the supermarket, either.  I treated the straweberries like the fish and cooked some rice in a mixture of water and sweetened orange juice (surgar and caramel syrup added, for some stickiness I hoped).
For the wrap, I used freshly-made colored crepes, attempting to make them look like the dark green/black seaweed used to wrap sushi in restaurants.  Well, I tried.  Not having a sushi rolling mat, I am now inspired to get one, because rolling individual rolls is both impractical and nearly impossible.  I used a little Nutella to glue it all together, so essential it's a strawberry-Nutella crepe, but in a mini version.
They aren't bad for a first attempt.  They aren't great, either.  But with a variety of fruits and candies, this could be a really fun alternative to bringing the typilcal tart to that next dinner party... 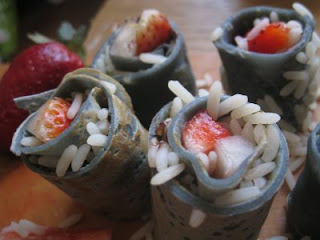