Top it Off with Tapas 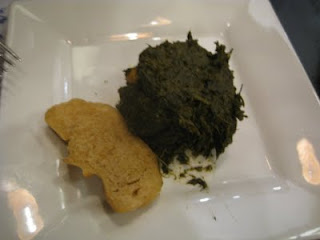 SPAIN! A week in the sun walking around will work up quite a thirst -- and a hunger -- for some of Spain's tastiest treates. And fortunately there is not shortage of mentionables yum yums in the land of flamenco and bull fights.
Tapas is a tricky subject when traveling around Spain, so be careful. I was surprised to find that sometimes drinks came with a little something to eat, and other times not. The culture has changed a lot from the time when the Castillian king ordered food be served with every drink in
the 1200s (or so Wikipedia tells me). Friends who have lived in Spain said that every beer basically coems with a meal, but that was far from the truth in my experience. 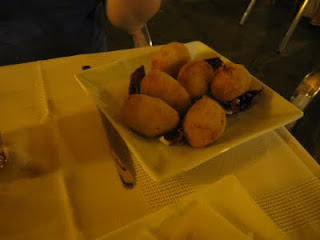 In Madrid, a pitcher of sangria came with two small crustini's of shrimp and avacado, which were delicious tapas. But a meal this did not make. But I had to offer a cheese tapas platter and some fried croquettes. I didn't complain, but ordering tapas as a main course just seemed odd -- though deliciously so. Another night I ordered drinks that came with nothing and had to order olives and a beef platter as tapas for dinner. Again, no one complained, but the cultural experience that I was promised wasn't there. Maybe it was just because I was a foreigner that I wasn't getting the Spanish treatment, but I wanted free food!
In Granada, a beer came with a plate full of french fries, ham croissants, and pasta covered in a sort of thousand island dressing (called American sauce in Europe). This was hardly the tapas I expected, especially after Madrid, but it was free! This was a demi-success at best. 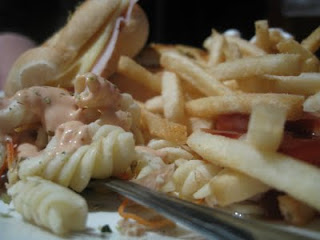 Overall, the tapas culture was brilliant if you were willing to shell out a few euros. In Sevilla I shared a wonderful tapas dinner with Suzy including Andalucian meat balls, a spinach and chick pea mixture, and some sort of veal or pork product that was swimming in the most delicious sauce. But none of that came with the pitcher of sangria we ordered. Each tiny tapas portion was between 3 and 4 euros, which adds up if you are fighting a big hunger!
I learned that the idea is not to go expecting free tapas, but to be surprised when you DO get it. At the end of every tapas experience, I was happier to have the ice cold beer in the summer heat than anything else, but the little nibblies were a much welcomed treat to snack on while enjoying the Spanish experience.