Seafood that didn't make me vomit... 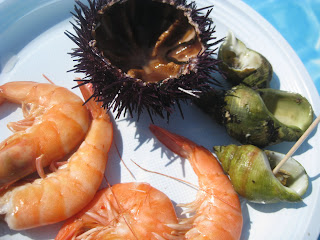 So after a whirlwind weekend in St-Malo and Mont St-Michel at the end of March, I ended up in the hospital with a case of horrible food poisoning. OK, so maybe it was the oysters, maybe it was the live shrimp we plucked out of the bay and ate raw (read: live), maybe it was the salted lamb. Whatever it was, it was horrible and I puked it out like no one's business.
When I went to the Ile de Re last weekend, right by La Rochelle on the French Atlantic coast, I was skeptical about eating anything that wasn't dead, processed, packaged, and sealed. Still, I couldn't turn down a tasting of some of the region's finer, yet raw, products: sea urchins. Les oursins in French are those prickly little echinoderms that, when cut in half, produce a lovely little appetizer. Paired with sea snails and shrimp, I was more than skeptical. I was ready for the hospital again.
Fortunately the tasting ended in smiles and not IVs. The urchins were salty and savory. Not too slimy but definitely fishy enough. The shrimp were...well...shrimp. The sea snails were actually delicious with a little bread and it all washed down nicely with some white wine. Would I do it again? Yes, but not in a heartbeat. Nor would I actively seek out raw seafood anytime soon. The thought of ripping off that shrimp's head in the bay of Mont St-Michel and eating it still turns my stomach. At least I have only fond memories of the urchin. Granted, it was still moving when my plate arrived, but I like a little animation with my meal. And in lieu of a piano player or stand up comedian, I guess flailing echinoderm arms will have to do.