May 10, 2010
Chloe's, a sponsor for Cupcake Camp just opened recently in the 9th arrondissement on rue Jean-Baptiste Pigalle.  Cute, pink, and retro, it's everything you would think a cupcake boutique would be.  Cat and I headed there for a "business meeting" and we shared a peanut butter cupcake as well as a banana one.  Not bad, we admitted, but Chloe's story is an odd one. 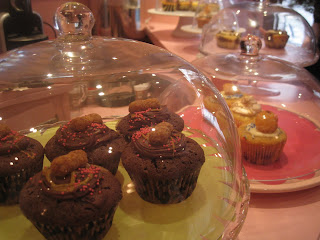 Apparently since the age of 9 she hasn't been able to eat sugar.  Diabetes would spell disaster for most bakers, but she trudged through it.  One wonders how she samples her recipes since she doesn't even touch sugar.  But she is working with gluten and sugar free recipes in order to share cupcakes with everyone.  An admirable goal.  Her sweet persona won us over immediately. 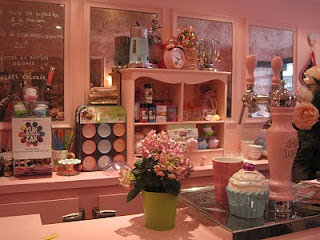 Definitely a recommendation for a Pigalle/Montmartre cupcake crawl.  She also sells bagels, coffee, and tea, so this place has got something for (almost) everyone.