June 12, 2010
French refrigerators are generally dorm-sized, the kind my father and I picked out at Sears before I moved to college.  Space is a luxury and stocking up on breakfast sausage and large gallons of cold milk just isn’t an issue in .  My mother would vomit.  She has three refrigerators.  The main one is in the kitchen that stores food that they eat and food that is frozen that she and my father will probably eat.  Found here are perishables that are still within reasonable eating dates. 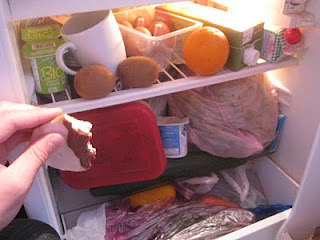 In the garage are two other refrigerators.  Closest to the kitchen in terms of distance is the original second fridge.  A back up, if you will.  It houses leftovers and frozen mozzarella sticks.  Also found here is expired mustard (still useable), extra ricotta cheese, and at any given moment a tray of eggs that no one really knows about.  They must be cracked to discern edibility.  It is also the traditional storing place for any left over Easter or Halloween candy.  While often aged, the food inside can be eaten with proper care.  Especially the candy, which has to last until the next big holiday.  Stretching Cadbury eggs through the summer isn’t an easy feat.

Then there is the third refrigerator, the family’s original one, farthest away from the others, that houses beer, Mike’s Hard Lemonade, and whatever pot roast leftovers that couldn’t fit in the second one.  Like an old trusty friend, we keep it around, having moved it to the garage when the kitchen was fitted with a more modern model.  We still stick some age-old magnets to it and occasionally check inside, fully aware that most things inside are not edible.  We try not to mention that for fear of insulting the fridge or my mother who couldn’t imagine living without it.  Some people have garbage disposals.  We have a third fridge.

Each time I go home I marvel at the three of them, opening each door with a sense of awe and amazement.  Inside the principal refrigerator I find the food my mother bought for me to eat during my time there: delicious supermarket sushi, chocolate peanut butter ice cream, and a token fruit or vegetable because I always complain about the lack of fresh food.


After eating these recently purchased items, I sneak to second fridge for the leftovers that she forgot about – chicken , alfredo pasta, and good cold pizza.  Then, again, to remain on good terms, I say hello to third fridge and politely decline its offerings. 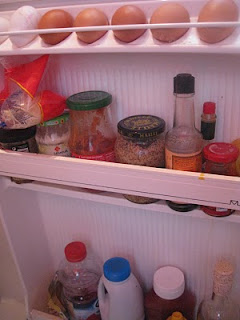 When I open up my fridge in , which houses food for two people (a roommate and myself), I stare aghast.  With all of this food, and with all of the things that go to waste, I can’t imagine how my mother deals with three full sized refrigerators when dealing with only two people and a dog (and occasionally my sister).   Thank goodness for entertaining, I guess.

The food in is so fresh and city-living makes it easy to grocery shop or go to the market four times a week, I can’t imagine ever needing a real adult-sized fridge.  Let alone three.  I still cringe when I find a rotting bag of radishes in the crisper or when I vaguely remember what happened the day the cream expired.  I hate waste and it hurts to throw those radishes away, even if they only cost a euro.  Maybe my mother just moves old, inedible things to the third fridge to delay guilt at wasting, or maybe overabundance is a way of compensating for times of underabundance.  Who knows?
Fortunately the little fridge means I buy less, so less goes to waste, but secretly I like to go home and see what’s sitting in the second, or even the third fridge and to test my stomach’s limits.  Week old pasta doesn’t scare me.  After all, nothing can smell worse than that delicious fresh Camembert I have sitting in my fridge, can it?