Black and white, nice and right...

But gone are the days of New York City delis, pre-prepared foods, assortments of candies and nuts, and endlessly varied pints of Ben and Jerry’s that you could eat in Washington Square Park next to a homeless man as rats scurried beneath your feet.  Those were the days.  In , I have never seen anyone buy a pint of Ben and Jerry’s let alone eat one.
The deli right in the heart of NYU’s campus, on right next to Weinstein residence hall, was a favorite memory.  I don’t know that I ever really saw it closed.  And among its most prized good was one that I indulged in often.  Maybe it’s my sweet tooth, maybe it’s my attention to low prices, but the black and white cookie, individually wrapped and sitting among an ocean of cookies and cakes, was always my favorite. 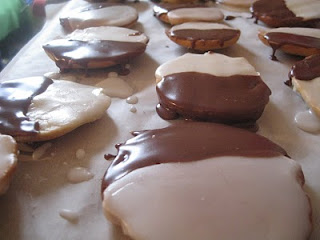 A institution, I soon learned, the black and white cookie predominates delis and supermarkets in a city where so many things come from elsewhere.  From the Financial District to the , these little gems are everywhere.  So I thought I’d see what the French think of them.
Today, a rainy day, became a baking day.  Homemade black and white cookies are on the menu.  Their destination?  The .  I have a test tomorrow morning to test my French skills (Je parlez vous francais, come on!) for admittance into the school.  I will meet up with my friend and former colleague who works in the office of international students and exchanges at the University.  She’s French.  She already loves my cupcakes, so I’m going to throw a few black and whites into the tin to see what she thinks of them, paired with a chocolate cupcake of course.  Sugar high?  Nah…
Cakes have been a godsent as I far as my French administrative life has been concerned.  Fascinated already by my youth and American-ness (Mais t’es tout jeune!) I decided to help butter up, literally, my connections in the French world.  She liked the green tea cakes.  She liked the banana Nutella cake.  She liked the violet cake.  She should love the cookies.   Maybe it has become an unfair expectation on her part that I will bring her cake anytime I see her, but it is always an unfair expectation on my part hat she will help me with whatever I need.
I am OK with keeping up my end of the bargain if she is. 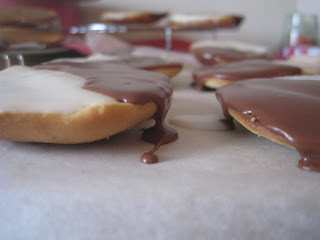 So the black and white cookie, while not the prettiest, is quite tasty.  I swear, that French butter again, it changes everything.  So tomorrow after my test, will it be a healthy dose of cuisine or a sugar overload for my dear French friend at the fac (university)?  I have to go buy more powdered sugar because three cups isn’t enough.  Does that bode well?  I guess we’ll see!