June 20, 2010
Peppermint Patties, or their little brother Junior Mints -- the candy of dreams.  In we have “After Eights” like in the , but the chocolate peppermint candies are things of legend as far as I am concerned.  Same idea, different sizes.

My sister, in all of her innocence, used to call Junior Mints something relatively ridiculous like “Union Mints,” or at least that was my brother’s way of teasing her.  I can’t remember.  She had a speech impediment.  We all did.  I couldn’t pronounce “sh” or “ch” sounds until after third grade.  Maybe even fourth.  It was bad.  For me, I could say “York Peppermint Patty” without a problem and it became one of my candies of choice.  Cool, refreshing, chocolately – in a word, perfect.  Our preferences didn’t divide us, my sister and me.
Hence the inspiration for this weekend’s cake.  A double layer chocolate cake (classique) with a mint butter cream and chocolate mint ganache.  Talk about heaven.  It was decadent and indulgent, but not totally sinful. 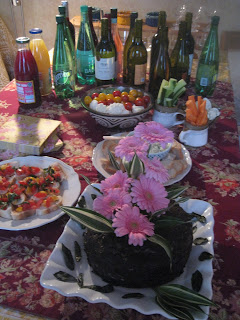 I found really great mint syrup at Daniel Rose’s shop (http://springparis.blogspot.com/)  by the location of his new restaurant, Spring, in the 1st.  After a wine tasting there one day with my friend Cyndi, I decided that I needed to buy something and the bottle of peppermint syrup caught my attention.  The store clerk said it’d be great with various alcohols, but my mind when right to cake.  I should have saved him a slice.  He could have made me a cocktail.

I told Cyndi my plans and then she had the idea stuck in her head for a while.  So this weekend she commissioned me to make the cake for a summer party she was throwing at her swank apartment in the 16th for some French and American friends.  Last night I arrived with a box and opened it to reveal the rustic looking cake.  We decorated it with some flowers, which surprised many of the guests.  Afterwards, though, it made sense since the ganache looked like dirt.  Gross?  No.  Genius.

Around 10PM we cut into the cake and the rants started up on both the French and American sides.  It was a winner.  The vanilla cake I made got almost as much attention, but was nothing compare to the chocolate mint situation.

“C’est comme un After Eight,” a French woman told me with a smile across her face.  She went back for seconds.  Always a good sign when a French person deigns to take more. 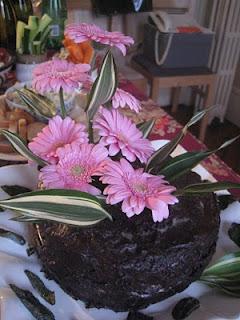 An American abandoned her plate of hors d’oeuvres after hearing this and shot right to the sweets.  I think she took seconds, too.

By the end there was nothing left but a few mangled flowers that were violently plucked from the chocolate ganache.  Success?  Yes.

It may be fun next time to actually put After Eights on top or something crazy like that, but after watching what happened on that episode of Seinfeld when Kramer dropped a Junior Mint into a patient undergoing surgery, maybe I’ll just try to recreate the taste and not worry about the candies.