June 08, 2010
She was sweating as much as the container of sour cream that was on the conveyor belt in the May heat.  It was the big showdown.  Me.  The French girl.  The supermarket.  Check out time.

What used to be a moment of stress and angst and uncertainty has become a newfound game.  Learning to screw with the locals, to me, is a surefire sign of cultural integration.


Normally at the supermarket, at least in , the check out line is a moment to indulge in a Kit Kat or browse the TV Guide.  In , it’s a rare moment of misplaced rush that usually ends in huffs and puffs and somebody nudging their shopping basket brusquely into your backside.
So I was in line.  I had a basket full of groceries.  I had pre-weighed my vegetables, as they do in .  I had my milk right off the shelf, not refrigerated.  I had my eggs, again room temperature.  I was feeling good.  Then I began to load my items onto the conveyor belt, as most would, behind the group of goods of the girl in front of me.  I placed my cold items together, as mother always taught me to do.  This was going really well.  No surprises.  No unknowns.  I was a pro.


And then I caught the eye of the French girl in front of me.  She was anxious.  Visibly so.  I couldn’t tell if she just had to pee or if she was in a hurry because her husband was waiting for dinner.  I dared not ask.  Working public toilets are scarce in so I could have understood the former.  But then I saw her eyeing our respective products, lined up with a healthy amount of space between the two.  Was she judging me?  OK, so I know I buy a lot of store brand goods, but I am on a budget.  I don’t need her giving me the stink eye because I have Leader Price rice (think America’s Choice).
Then as if she could take it no more, she reached, with cheetah-like speed, for small dingy piece of wood that was alongside the belt.  It was about a foot long, an inch or so thick in either direction, reminiscent of a disciplinarian tool found in a Catholic school teacher’s desk.  She reached for it and plopped it down between our groups of groceries as if she were so disgusted by my products that she would be able to taste their sordidness on her own food.


The relaxation in her shoulders, the tension in the air, and the relief on her face would have made an onlooker think that we needed a cleanup at the register.  But no, she didn’t urinate.  She was just doing what any good French grocery shopper does.  She was separating our respective purchases. 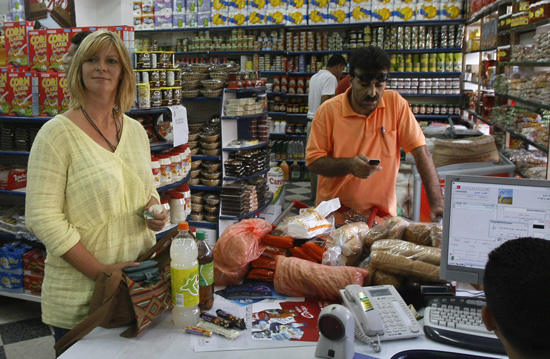 This was not the first time, nor will it be the last that such stress surrounds the wait for grocery separation.  Who holds the responsibility?  Who will put it down?  How will the clerk ever know where my goods end and hers start?  Subsequent visits to the grocery store alert to this responsibility have proved that people really do get upset about this.  Old ladies, old men, young mothers, even some teenagers will all huff and purse their lips out at you in that oh-so-French style if you don’t take the initiative to divide the goods.


Hey, no criticism on my part.  I don’t want your diapers anymore than you want my 2 kilos of butter (fool?) but let’s take it easy.  There’s no reason to get antsy over a little piece of wood (or plastic, in the nicer stores).  What’s the rush when you’re going to sit there counting out your 5 centime coins before even considering bagging your purchases.  If you’re going to stress and rush and hurry things up, let’s have a little follow through to the end, Paris.  Thanks.


Until that happens, I like to see how long I can go without dividing to see who will crack and who will let it go.  So far, they have all cracked.  It’s not so much a game as much as payback for all of the times I have been miserable in the grocery store, waiting for someone to go back into the store to get a bottle of milk, watching Gertrude McFrenchie argue about the twenty cent difference in price on a roll of paper towels, or having to go weigh my vegetables and get a sticker with the price because that can’t be done at the cash register.


Suddenly the grocery store isn’t such a daunting place anymore.  It only took two years…
PS Apparently this is an issue in other cultures, but for different reasons!