March 11, 2011
The sun was just rising in the sky, warming the top of the Eiffel Tower.  I was walking through the Champs de  Mars, the large park in the shadow of the tower, minding my own business when I came upon a memorial.  It looked like a small Egyptian temple with all of the cities of Europe marked on it.  Paris. London. Amsterdam. and Brussels.  Or should I say Bruxelles as it is spelled in French.  Apparently the French aren't sure, so they decided to engrave both spellings on the monument.  Spell check much? 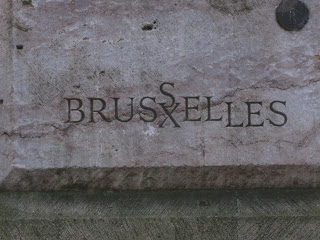 I'm sure it's actually some homage to the Flanders/French divide in Belgium, but am I giving them too much credit?