Paris Win: Fruit of our Looms

March 15, 2011
What made this moment even more endearing was the fact that she got up and waved at us, cheering a bit as well.  You have to love the paparazzi effect.  I walked a tour past the Air France building, just next to the regal gold-domed Invalides and a film crew appeared to be filming what we all thought was a Fruit of the Loom commercial...though I don't remember zucchinis being a part of these underwear ads -- it just seems inappropriate.  Maybe the famed Veggie Tales have gone live action?  In any case it's refreshing to see other people doing crazy stuff in the streets.  It makes me feel less transgressive. 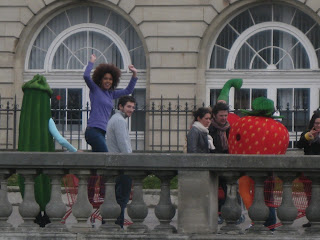 After fashion week and having my tourists spot Karl Lagerfeld, a giant strawberry can barely hold a candle, but we were still excited.  Though apparently not as excited as the lady in the photo was to see us...