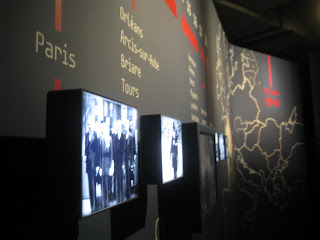 War really isn't my thing.  I can do without it.  History, however, holds a special place in my heart.  On family trips to any place that included a museum, like historic in , my dad and I would stop and read each sign of each display while my mom and sister tapped their feet at the end of the exhibit.  We were slightly compulsive about learning.
is not short on history, and considering myself an amateur of warfare, yesterday I made a special educative trip to the Hotel des Invalides, home to the military history museum in .  Thinking I’d just see some canons and a few pieces of armor, I was blown away by the extensive royal collection of military artifacts from Roman times, through the middle ages, through the Revolution, and all the way up to the end of World War II.  Not surprising, I suppose, for a war museum.
But it only got  better.


In addition to some well organized exhibits detailing the evolution of French warfare, the museum had lots of multimedia that weren’t as superfluous as they could be.  Additionally, almost every exhibit was in at least French and English, affording an accessibility that even the Louvre doesn’t offer.

I checked out Henri IV’s armor – he was a stocky guy.  I saw what Louis XIII wore for protection as a child – poor kid.  And I saw Napoleon’s infamous hat – it got me a bit misty eyed.  But the real fun began in a relatively new exhibit opened in 2008 called L’Historial deGaulle dedicated to former president Charles deGaulle – not just an international airport, also one of the most brilliant French leaders.
The futuristic exhibit was something out of at Disney World -- or better yet, a command room in the Death Star.  My dad and I also appreciate Star Wars when we're not reading plaques about battles or Native Americans.

In order to experience it you need to wear a headset that tells stories depending on where you are in the exhibit (in French and English, again).  After a 25 minute video detailing deGaulle’s life and accomplishments, the exhibits go into even more detail about World War II, the war in Algeria, and the student riots of ’68 for example via interactive maps, projections, and media displays.
The trickiest was figuring out how to interact with each multimedia device without looking like an idiot.  At one station, you stand in a circle and simply point to the screen so that the cursor follows your hand and you can click on one of several short video clips (see image below).  I felt like a failed Jedi waving my hand around trying to learn about the student riots.  I succeeded eventually.  Yoda would be proud.
After three hours in the museum I had gone from exploring medieval armor to pretending I was Wolf Blitzer in a CNN-esque newsroom, touching screens and digital displays, waving my hands as if Obi-Wan were instructing me.  The contrast was not lost on me, but props to for putting on an impressive show in honor of deGaulle. 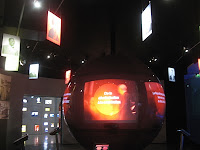 For all of those jokes about the French being such whimps during war, the museum does a pretty good job convincing otherwise.  And the curators even let you feel like a Jedi Knight while doing so.  But for all of the interactive digital fun, royal armory, and brutal weaponry that I discovered, I missed the highlight – Napoleon’s tomb – before it closed.  Golly, I guess I’ll just have to go back….
Infos: Free to EU residents, including abroad students, under 26 years old.  Special temporary exhibits not included.  9 euros full tariff.  Plan on entering no later than 4:45pm, though hours extend in the summer.  The deGaulle exhibit closes every Monday.  Even digital screens need rest…