April 12, 2011
No matter what time of the year, though especially as it warms up, the markets are one of my favorite parts of .  Growing up in suburban , there was a healthy mix of agriculture in my diet.  The family would go pumpkin picking in October.  We’d get corn from roadside stands after visiting family across the state border.  We often grew our own tomatoes and strawberries in the backyard, which worked until the rabbits found out.  I even went to a summer agricultural science program at – talk about an experience.
Anyway, while the majority of our food came from the local supermarket, we weren’t confined to it.
When I moved to as a student, I thought it was pizza for the rest of my life.  Instead, I have fond memories of walking through ’s farmers’ market on the weekends.  The fresh produce astonished me, and the prices were far from ridiculous.  I learned very quickly – even though I was, fortunately, eating in a dining hall – that vegetables and fruits were not always sold in plastic wrap at the grocery store, even in the big city.  There was another way.
Parisian markets have only enriched my fascination with fresh produce.  Unlike the intimate farmers’ markets of or the roadside stands in , the markets are not always pushing local produce.  In fact, most of the vendors are merely salespeople for producers that sell wholesale at the Rungis market, just outside of , said to be the largest food market in the world – a sort of modern day Belly of Paris for you Zola fans.  The vendors do note where their produce comes from though, so a market regular will soon be able to distinguish instantly a French strawberry from a Spanish one.
While I love roaming the stalls at or the Marché d’Aligre, I was initially intimidated by the size of it all.  And some of the unspoken rules of the market took a while to learn.  In , you have to keep moving.  In Barbès, you need to act fast and haggle when you can.  In Aligre, you need to avoid the pesky caddies that seem to disrupt traffic at every angle.  They are my biggest enemy in Paris, eliciting more anger from me than any other entity in the city, but, stills no market day would be complete without them.  The local quirks of each neighborhood seem to manifest themselves in the vibe of the market.
Now I pride myself a semi-expert, with a large amount of work still to do.  I have yet to tackle anything beyond produce – fish, meats, and cheeses.  I’m just content wandering, looking for the cheapest bell peppers or the freshest looking berries.  I’m happy tasting the slices of pineapple that various vendors cut for me.  I smile every time I pay and get called chef (boss, essentially).  It’s just another ritual that never gets old.  Especially during peach season.  Oh, and tomato season…and fig season…and…well, you get the idea... 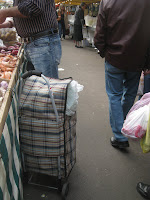 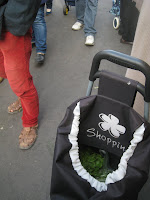