Lowering Expectations at the Sorbonne... 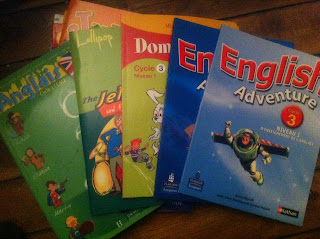 “In ,” she said, “they think that English is the only language.”  I so visibly rolled my eyes in disgust that the professor looked at me, the only American in the class, and said, “But I’m not counting you.”
Thanks, but it was too late to matter.
It was another day at the Sorbonne Nouvelle.  We were discussing our research projects and the topic of language and translations came up, a favorite weekly topic.  Apparently everyone was immediately an expert in American culture and they started criticizing the way Americans watch only English films or else foreign films dubbed in English.
That’s when professor, a fiery-eyed French woman in her 50s or 60s, dropped the stereotype bomb.  Not only was it misplaced in a class with quite a few foreign students but it was followed with the clear-as-mud reasoning that is emblematic of these kinds of situations.  “The numbers speak,” she said.  “Only 10% of Americans have passports.”  Suddenly not traveling translates to being ignorant of other languages.  Is there a hint of truth?  Maybe.  Is it fair reasoning in a masters-level program at the Sorbonne?  Probably not…
Far from a flag-waving American, I do get patriotic when I need to, especially when someone who is in charge of educating starts incorrectly generalizing and representing me.  And for her to tell me that, “Oh je vous exclure,” because I disprove her argument is irresponsible and quite frankly embarrassing.  Can you tell I was peeved?
I can take American criticism at dinner parties when someone jabs our politics or our culture (or lack-thereof as I’m so often reminded).  It’s all in good fun, usually, and if not, I’ll get over it.  I still have an American passport at the end of the day and no one can take that away from me.  But it’s tough to attend a world-renown school like the Sorbonne and have to listen to a professor make sweeping generalizations about the – especially after telling us she spent a lot of time in .  It sucks a lot of the credibility that we’re already fighting for in an institution that lacks organizations and where even the professors don’t show up for class.
As class ended, a Romanian student, who I’ve known since last year, commiserated with me, expressing similar surprise at the professor’s wanton lack of tact in the matter.  She put things into perspective for me, at least.  “I don’t tell them I’m Romanian,” she said, “it’s even worse.”
Still, if this is what students can learn in a masters program, I can only imagine what it’s like for younger more impressionable students…