January 15, 2013
I’m not ashamed.  I’m 26 and until this year I had never visited California.  Sure I’d been from Florida to Montreal, all up and down the east coast, but the west, well, it never beckoned me.  Instead I looked east to the Old World and went back to my roots – well, sort of.  France was close enough to Italy, so it did the trick.

While Facebook friends were spending weekends in Vegas or doing Mardi Gras in New Orleans, I was traipsing across Europe with weekends in Berlin and ferrying along the Mediterranean.  Apples and oranges, really.

But for an East-Coaster living in Paris, SanFrancisco became something of a promised land. It wasn’t quite the land of milk and honey, but the coffee and Mexican food didn’t seem too shabby.  And Paris was bringing me down and I wanted sun, pronto.


The post-holiday trip this year was nothing short of a “why not” scheme, largely based on mutual vacation time and at least some money saved up between me and a fairly close friend from NYU.  Tickets, apartment on AirBnB, and voilà, we were off to sunny San Francisco with a list of addresses and suggested eateries from a fellow expat who once called the City by the Bay home.

This was not Paris.  Hell, this was not New York, and I loved every minute of it.  From the burritos and tacos to the dim sum and crab (in season!), the palm trees and beaches (the Pacific is huge…) to the sea lions and Alcatraz, there was no shortage of things to do.  We ate our way through, stopping at the Ferry Plaza Market for some top notch fruits and some chocolate peanut butter pucks with sea salt.

We even found some bridge to walk over.  It seemed pretty popular but I think it’s a hidden secret.

From the bohemian flare of the Mission to the very out and proud (and sometimes stark naked) locals in the Castro, we were delighted with how calm, smiling, and healthy everyone in San Francisco seemed.  Everyone was running.  Like, everyone.  This is a place I could call home.

After drinks with some new friends through fellow Philly expat Lindsey, and dim sum with my brother, a transplant to the Bay area, we started to get a feel for what it was like to live in San Francisco.  Words like expensive, trendy, often pretentious were thrown into the mix along with amazing, delicious, and exciting – so it’s really the fresher, hillier version of New York or the sunnier, more English and Chinese speaking version of Paris – did I understand?

After a few exciting days in the city and a wine-soaked afternoon in Sonoma, we ended our trip with a spat of unexpected adventure of sorts that eventually led us to Dolores Park at some ungodly hour with my old friend from high school who was letting us crash on his couch for the night.  A bunch of locals were hanging out on the playground, playing Frisbee and sharing beers while chasing after a party bus that drove by.

Sure it’s gorgeous, but I’d like to see anyone try that in the Luxembourg Gardens and get away with those kinds of antics.

Coming back east, to a fog-covered JFK airport, flu season, and a notable lack of taquerias, I am saddened to say good-bye to the bay but having barely scratched the surface, I’m sure that a repeat trip is in store.  Why not, right? 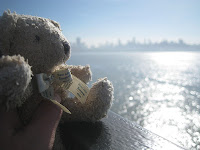 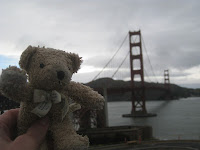 (There goes that bear...)
Good eats…
Bi-RiteIce cream – WIN for the malted vanilla and peanut brittle ice cream
Contigo – Go for the excellent tapas in the Castro; try the cinnamon spiced pork
Pancho Villa Taqueria – so good we went back to try the burritos after a successful taco experience
Recchiuti – great peanut butter chocolates
Dandelion – excellent chocolate desserts
The Beanery – not the best but definitely some good locally roasted coffee and scones
In andOut Burger – wish I had researched for the hidden menu…but just lovely.

Good do’s…
Dave Egger’s Pirate Shop (826 Valencia) – I liked this author before I knew he had a pirate-themed shop where proceeds benefit children’s writing programs…a must!
Ferry Plaza – the market on Saturday morning was a lot of fun and full of fresh produce.
Golden Gate Park – we walked the whole thing almost, and saw the American bison and the Pacific Ocean at the other endd.
SutroBaths – Sutro Sam the river otter was living there when we visited the ruins of this old swimming center, but we couldn’t find him.
Alcatraz – shut up and be a tourist and make sure you take the audio guide – it’s really well done.
Golden Gate Bridge – duh.
Chinatown – doubly duh.
Fisherman’s Wharf – the last duh.  Those sea lions sure can bark.