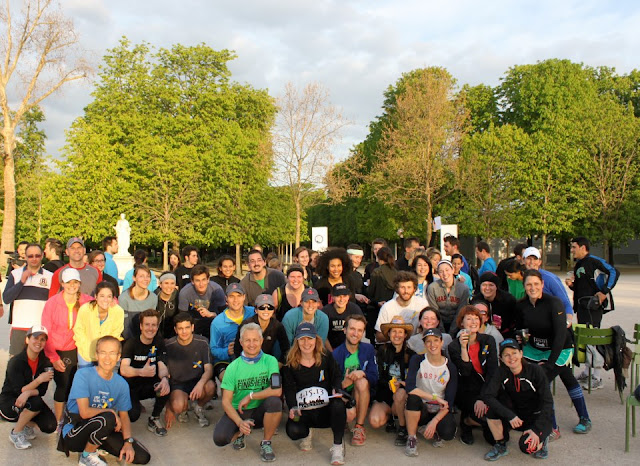 One week after the horrific events at the Boston Marathon, Parisians and expats united to run a 5k called #BostonStrongParis in solidarity with runners around the world. An initiative launched by the Pavement Runner, also named Brian, the idea quickly spread. The idea was to do something beyond donating money or posting on Facebook, but to embrace the community in a real and human way, according to the Pavement Runner. Being helpless so far from home, I felt the same way, so I went ahead and registered an event for Paris. I figured a few people would be interested in Paris. Maybe 10?

By Monday afternoon, 130 people had RSVPed and I feared arrest for an illegal manifestation. But as the crowd formed and we prepped from Place de la Bastille for a scenic tour of the Seine and the Louvre, we were in the clear. Runners of all levels trudged on, stopping on the Pont des Arts for a quick group photo to send back to our American co-runners. It was truly a unique and moving experience.

Through the Tuileries towards Concorde, smiling and sweaty faces were darting to the finish, huddling together for another photo with the Eiffel Tower in the background, like good tourists. After a moment of silence to remember the victims of the attacks, but also to rekindle the positive spirit that we all had momentarily lost while our sport was attacked, the group cheered and applauded. A job well done.

Then we had juice.

The 80 or so runners that showed up with just four days’ notice is a true testament to the people that practice this sport, be it in Paris, San Francisco, New York, and elsewhere. I’m honored to have had so much support during the hasty organization of #BostonStrongParis and I thank everyone including the Pavement Runner, the team at Jogg.in, the photographers, Paris by Mouth, Bob’s Cold Press, and especially every single runner who came out to be with us. Merci, vraiment from the bottom of my heart.

I hope we never have to organize an event like this again, but I look forward to running with you all again at some point under a more joyous and uplifting pretense. Be strong.