It’s time for the obligatory marathon recap.  After 42.195 kilometers and a bit (well, a lot) of pain, I got my tee shirt, rain poncho, and ever-coveted medal.  But more importantly, I made it all in a time that exceeded my expectations.

Considering that my last marathon consisted of drinking wine and eating oysters, I wasn’t sure what the Paris marathon would be like.  The wine was replaced with water (only water…) and one cup of Powerade.  The oysters were gone, replaced with raisins and bananas – no complaints here despite slipping cartoonishly on the peels.  And the group of jovial costumed fun runners was replaced with 40,000 hardcore racers ready to invade the streets of Paris.

And invade we did.  After briefly considering joining my fellow runners with a pre-run urination on the Champs Elysées – because how often can one do that? – I hopped in the corral with the other 13,000+ runners that hoped to complete the marathon in 4 hours.  In Medoc, we finished the marathon in just under 6 hours, so I may have been shooting a bit high.

As we departed, the masses swarming along the Champs with the Arc de Triomphe behind us, the crowds began to cheer us on.  All down rue de Rivoli, past the Louvre, the Hotel de Ville, and through the Marais spectators hooted and hollered, waving signs and flags from England to Japan and everywhere in between.

This really is the marathon in the most beautiful city in the world...

Past Bastille and on to the Bois de Vincennes, I kept up a good pace.  I was running alone, with only my body telling me if I was going the right speed.  “Slow down,” I told myself, out loud, repeatedly, hearing Heather in my head, “Don’t hurt yourself, Bryan!”

I glided through the Bois de Vincennes effortlessly, taking a moment to pee on a tree.  It’s really hard to find the right tree to pee on while running, but I picked a little one just before our exit of the park and back into the city.  It looked like it needed some attention.

On the way back to Bastille I called Heather, asking her where the cheer squad was, so as not to miss them.  As I rounded kilometer 23, I heard the horns and yells as a big yellow sign announced “Bryan’s Burger Stop.”  There were my friends, hamburger in hand, cheering me on, feeding me, and keeping me going (Thank you!).  The 4-hour pacer approached and Heather shouted at me to go, as I swallowed my last bite of burger, a bit of protein that would keep me going for the next half of the course.

Weeks of training in the brutal Paris winter, cutting alcohol (mostly) out of my diet, and pushing myself on my routes seemed to be paying off.  Along the Seine, onlookers cheered from the bridges and quays as we ducked into a tunnel for a spell, the collective shouts of thousands of marathoners echoing all through the stretch.  On the other side, sunlight streamed as we followed the Seine towards the 16th arrondissement.  Things were heating up in many ways.

Soon I started to slow down, and I felt it.  Fortunately I was still passing people, as many began to walk a bit at this point.  The streets narrowed a bit but I weaved in an out, as others did, eagerly awaiting the final stretch through the Bois de Boulogne.

Towards the upper 30s, I could feel the end in my legs even if my brain said, “Shut up and run.”  I felt like I needed to stop and walk a bit.  I didn’t want to, but I was hitting a wall of sorts.  Then I heard and American behind me yell, “Get out of my fucking way,” to some unassuming Frenchman.

I turned to look and giggled about the enraged runner, catching the eye of a woman behind me who said, “I need her behind me to motivate me!”  Meet Becky, a visitor from Brighton running what she called her last marathon, though I’m sure that might be untrue.  We introduced ourselves to each other, both of us needing support at this pivotal moment to finish.  We promised to keep each other motivated, both trying to get just under that 4 hour mark. 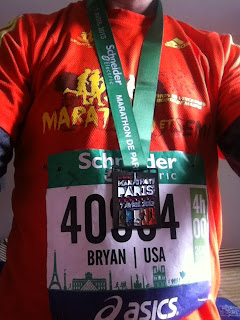 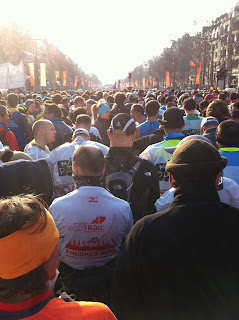 We talked and encouraged each other as kilometer 37 gave way to 38, then 39, then 40.  We maintained our rhythm, looking for the pace-setter in front of us to let us know how we were doing.  Around 41 we saw him, the pace-setter with the green flag waving, and we took off.  I yelled for Becky as my legs gave their very last, sprinting towards the finish line, those end-of-the-line tears welling up as my head whirled and I wondered if this is what Pheidippides felt like when he arrived in Athens (and subsequently died).

We overtook the pace-setter.  I crossed the line at 4 hours and 2 minutes, just 2 minutes shy of my all-too-recent goal of under 4 hours, but way better than my initial goal of under 4.5 hours.  A hug with Becky, some water, food, and of course our medals, and we were on our way.  The cheer squad awaited with yet another burger and the promises of pizza and beer. 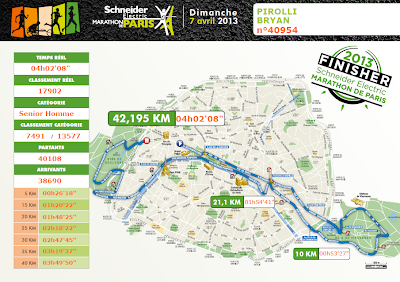 A new personal record is set and the next marathons in France are scheduled (Médoc and Lyon if you’d like to join!), now I’ve got my eyes on London and Berlin, before heading overseas for Chicago and NYC in 2014 and 2015.  Goals, goals, goals.  Maybe one day I’ll even qualify for Boston, but I won’t think about that until I can stand up again without any wobbling...