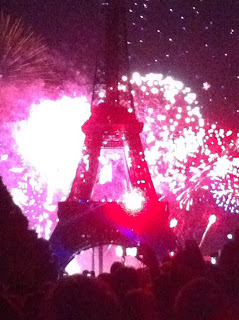 I’m not French. Yet. July 14th has been, as far as I was concerned, a delayed July 4th celebration. Since 2008 I've celebrated it, always secretly thinking, “Wow, a revolution, how original. That’s so 1776.”

This year, things became decidedly more French. I embraced the fact that celebrating July 4th in France is futile. Even among other American friends, we just don’t really care. Without fireworks, what’s the point? The day came and went without much fanfare. Independence was alive and well, I just didn't need to light a sparkler to know that.

Bastille Day weekend arrived, however, and I felt a tiny swell of French patriotism. I wasn't about to memorize “La Marseillaise” or throw a baguette under my arm anytime soon, but I was excited to take advantage of the celebrations.

Next thing I know I’m along the Canal, July 13th, playing a heated game of boules, French baci ball. The fireworks are going off overhead as Parisians shoot them from the bridges crossing the water. Up the street the bal des pompiers was raging on as the music echoed from the buildings looming over us. 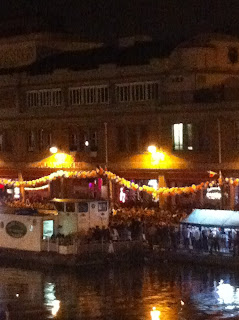 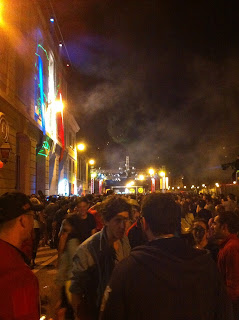 After our own tricolor of wine (white, rosé, and then rouge), we made our way to the fireman’s dance to check it out. The kitsch factor was palpable. On the way home, the fireworks continued popping overhead across the city, feeling like a warzone. Baghdad in 2003? No, just Bastille Day Eve.

Another bal des pompiers along the Canal by the Point Ephemère was seemingly spilling into the water. A Joan Jett wannabe was crooning about her love of rock ‘n roll while the lights flashed and the crowds gyrated.

Down the street I rolled on my little bike, making it home and safe into bed as the bombs bursting in air shook the skies overhead. But the best was still to come.

The next day, after waking up to the sounds of jets and helicopters flying over the military parade (again, a PTSD nightmare), it was time to lounge around and do nothing (so Parisian). That evening, it was off to the Champ de Mars with a picnic in tow for the fireworks at the Eiffel Tower (so unParisian). I joined friends and the thousands of locals – they do show up eventually – and tourists who waited hours to see the city’s most explosive display of patriotism.

Liberty. Equality. Fraternity. The theme, the Republic’s motto, was driven home nicely and often. As the tower lit up in rainbow colors with songs and speeches of equality playing while the fireworks illuminated the sky, the crowd gave a cheer. The nod to the recent legalization of same-sex marriage in France was clear and appreciated. At least by our group.

Then there’s that moment, after the thirty minute display, when the show gives its all. My jaw dropped a tiny bit as the final few minutes of the show crashed and boomed their way overhead as the tower glittered a little brighter than usual. It’s at this moment that you stop taking pictures and stop singing along to that Nirvana song that had been playing a few minutes ago (there are deep French existentialist themes in “Smells Like Teen Spirit”). You absorb this spectacle that only happens once a year – to a tune of 600,000 euros – and you print it in your brain.

Then you leave with the throngs of families and spectators who make their way into the night, with an unusually long trek home, making you momentarily question if fraternity and equality are really worth it (they are, in the end).

And you hope on your bike and cross the city and you look over your shoulder and you see the tower glittering once more as the clock strikes midnight. You realize that it may not be your birth country, but France has adopted you and you feel lucky to be a part of that. And not just because of the wine.