The Thing About Gelato...

July 05, 2013
Traveling with a family member for the first time – like, grown-up traveling – was a fascinating experience. My sister and I spent a few days in Italy. We hadn't spent this much time together since, well, I can’t even remember since when.

As siblings do, we had a few disagreements, though not over who gets the remote control or the last spoon of mashed potatoes at the dinner table. Instead we discussed family, friends, careers, and the perks and pitfalls of owning a dog.

Conversation got heated at times, but like old friends, and with no shortage of talking points to cover, we hit the road together without too much bickering. Mom would have been proud. And confused.

We trekked around Rome, Venice, and Florence, before one final pasta dinner and night on the town downing my downfall: gelato. It turned out to be the one thing we consistently saw eye to eye on.


I’m lactose intolerant. Or rather, lactose does not tolerate me – I’m not the one who’s small minded. But I happily pop a lactose pill for every scoop of dripping gelato that I could get my hands on, opting for fruit-based sorbets only a few times.

My sister, never having really seen my daily eating habits since I moved to college, was more than impressed (concerned?) with the amount of gelato I could pack away. This is what big brothers do, right? 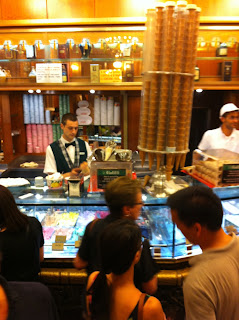 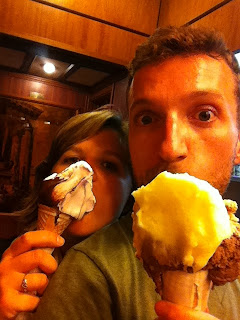 Each day was a challenge to see if I could eat more than day before. Challenge accepted. Challenge met.

One turned to two turned to three, and by the last night I was asking for my fifth large cone for the day. She was a trooper, joining along as much as she could, but I was the clear winner in the end. I insisted on two gelatos one night, after some serious walking, and she obliged, though often opting for a small cup instead of a larger size. It was difficult to argue while we were spooning flavor after flavor of melting gelato into our mouths.

While picking one gelato place to suggest in Italy is like suggesting one single baguette in Paris, there are a few addresses to keep in mind for some truly exceptional artisan Italian ice cream.

Note that many require you to buy a ticket first at the register and give it to the scoopers. Oh Italy…

Florence:
Bellamia: By far the best gelato we tasted. We went back twice in two days. They had flavors like caramelized fig and nougat that were just out of this world.
http://www.bellamiagelateria.it/en/?id=77&idnews=14

La Strega : On the other side of the Ponte Vecchio, on the side of the Pitti Palace, this artisan gelateria had some strange flavors that we tasted before settling on a Tuscan cream with marscapone and pine nut. The spicy chocolate packed a bit of punch as well.
http://www.lastreganocciola.it/ 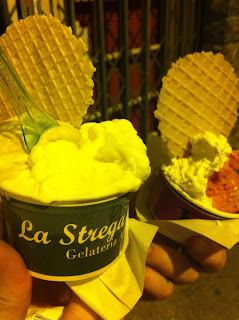 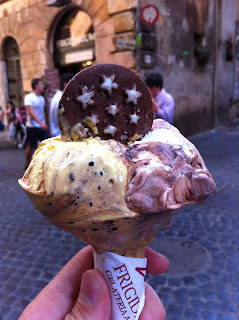 Rome:
Della Palma: The gelato is not the best ever, but with 150 flavors to choose from, you have to stop and try it. They even had an elusive peanut butter variety, so I had difficulty complaining at all.
http://www.dellapalma.it/en/

Frigidarium: I didn't appreciate the judgement from the other clients when i couldn't pronounce my flavors but their house flavor paired with some Tuscan cream made the humiliation worth it. A great neighborhood place to visit.
http://www.frigidarium-gelateria.com/

Gioliti: One of those “around since 1900” places not far from the Pantheon, this old timey joint caters to the masses with classic flavors intermingling with more unexpected ones like Champagne.
http://www.giolitti.it/

Grom: I’ve had the chain’s gelato in Paris and New York, but I couldn't resist trying some in Italia. The seasonal fruit varieties are my favorite. They are all over Rome, so it’s a convenient name to know. The apricot was the refreshing perk I needed on a sunny afternoon.
http://www.grom.it/ita/