The Trials of Vacation Running

August 07, 2013
Running around Paris starts to feel like a chore after a while. I’ll do my loop around the Canal or into the Buttes Chaumont. I’ll hit the Coulée Verte, the renovated railway that serves as a peaceful oasis in the east of the city. I’ll head towards the Eiffel Tower along the Seine as the boats float on by and the tourists snap their photos. This all sounds romantic and idyllic until about the 50th time. Then even the most devoted runner and Paris enthusiast needs a break.

While most Parisians leave during the summer because, well, it’s what you do, I’ve been lucky to sneak away a few times to experience new locations, new roads, new trails, and new challenges. Running in the shadow of the chateau at Chateaudun, once owned by a friend of Joan of Arc, and hitting the beaches of the English Channel in St. Malo have proved to be the perfect way to spice up marathon training. And a future trip to the Mediterranean means some serious coastal coasting with plenty of SPF. A boy needs help getting under that 4 hour mark…

But running in a new place isn’t always as peachy as it seems. Yes, there are new things to see and smell, the air may be cleaner, and the people might be friendly (they say bonojur as they run by!). But not knowing the terrain can be cumbersome when embarking on a 21km early in the morning. 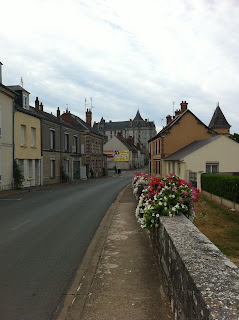 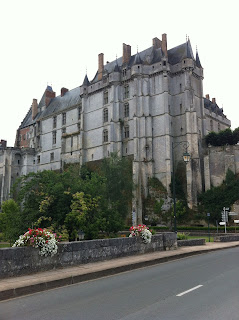 For example, Paris has lots of water fountains and cafés where I can get water for free. Dehydration is difficult. While jogging through Chateaudun, I had no idea where to find potable water. And along the beaches of St. Malo, I made sure to bring my own bottle since no cafés were up and running at 7AM to ask for a bit of refreshment.

After rehydrating, the body has other needs, I’ve discovered. When you wake up real early and your metabolism isn’t quite in full swing, eventually it decides that it needs a break around kilometer 7 and I usually need a bathroom. This isn’t Paris where public restrooms are reasonably frequent. In Chateaudun, there was one (ladies, be warned, no toilet paper). You can ask the local baker for a napkin, if you didn’t come prepared.

In St. Malo, there were several public restrooms clearly marked along the beach, but they cost 30 cents. What runner carries a pocketful of change? Eventually, by visiting a tabac shop and a supermarket, I was able to whittle my ten euro emergency bill down to a handful of heavy change, including 30 cents for the toilet. In the end, it was worth carting the coins for a moment of relief, even if it did add fifteen minutes to my time. 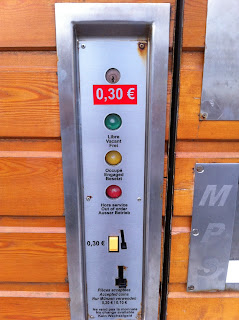 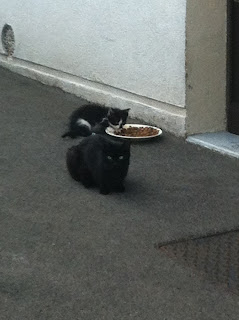 Charting a course is challenging as well. If I head south of the city, the neighborhood looks lovely according to Google Maps, but the concierge at the hotel in St. Malo suggested going north instead. Good call. Not knowing the local topography, I would have landed myself on some devastatingly boring stretches of roads and docks, making each kilometer that much more of a chore.

By talking with the locals, it’s not only a way to ask about things like bathrooms and water fountains, but to also ensure that the vacation run will be as distractingly beautiful as possible (unless you’re running in, like, Brussels, in which case just don’t bother).