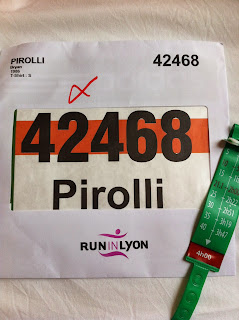 Bag packed, legs stretched, body hydrated, I went to bed Friday night awaiting a 5:15AM wake-up call in order to recheck everything for the 7:30AM train. I was off to Run in Lyon for my fourth marathon in France, just a month after the liver-testing Marathon du Médoc, and this time without my trusty partner Heather. I trained for months, logged my miles, and prepped the entire weekend trips weeks ago.

As I rose Saturday, I glanced at my phone to see that the clock had struck 6:45AM, the alarm silenced, and all sense of preparation was lost.

I bolted out of bed, threw on my clothes, and ran out the door to get to Gare de Lyon on time. I didn’t eat anything, I barely peed, and I wasn’t sure I had enough clothes for after the race. But fearing missing the train and throwing my training out the window, I couldn’t let a full bladder get in the way. My travel mate was more upset about missing breakfast, but two pastries at the train station made up for that. We made the train, just in time, and we chugged along to Lyon for the big pre-race day of eating and strolling with a healthy dose of lying around.

No bouchon lyonnais for us. It was a market-fresh roasted chicken and rice for dinner, after a delicious Japanese lunch. Nice and light and healthy. A day of strolling the city ended with a bit of Indiana Jones in the hotel as my eyes closed and sleep washed over me.

Sunday was the big day. Up early and with a generous amount of Britney Spears filling the hotel room, I hydrated, ate my banana, had a bit of yogurt, and warmed up with a dance or two. Gorgeous running weather – overcast with a slight hint of sprinkles – greeted me as I made it to the starting line. Thousands of runners filled the pen – some 20,000 in all. This was going to be fun, I thought.

As the gun shot popped in the distance, we ran, a giant pink hot air balloon floating overhead as spectators cheered in incomprehensible French from the sidelines.

“Here we go,” I said out loud as I crossed the line, unsure of what the next 42 kilometers would bring.

Unfamiliar with most of Lyon, I was unsure of where the route was taking us. Along the river and the quays of the Rhône and Saône we ran, brightly colored runners of all shapes and sizes (but mostly French) weaving in and out of each other until we reached the Parc aux Daims, a Central Park-esque oasis of greenery that houses a zoo. I feared the antelope would jump across the small ditch between them and us, but they weren’t silly enough to want to run a marathon.

We were nearing the halfway mark back near the starting point, and I was going strong. I felt light and airy as I made the half in well under 2 hours – totally on par for a sub 4-hour race. But then as the semi marathon runners ended their day, I kept going with the other marathoners, who were far fewer. The stretches of running became less lively. The runners more sparse. The cheers less abundant. The next 10 kilometers were spent in near isolation as I and the 1000+ marathoners made our way towards the stadium in the south end of the city.

My phone rang. “Yo, what are you doing?” my friend Linda asked.

“Running a marathon,” I huffed.

The call kept me going as I laughed at how absurd it was to even answer at that point. I was hurting a bit. At the stadium, I grabbed a granola bar and a bottle of water, struggling with the wrapper.

“Are you OK?” one of the police asked me.

While having managed to stay well ahead of the 4-hour pacer, the green flag-wearing runner who lets you know you’re going the right speed to finish in 4 hours, I now saw him behind me. My foot ached, my intestines were jostled, and I was losing ground. Fast.

He caught up with me, surrounded by a posse of friends or other lonely runners who wanted to keep pace. Then he overtook me. “Fuck” audibly escaped from my mouth at least once as I hobbled to catch up, but the toilet that I finally found after about 15 kilometers of needing it was beckoning me.


I lost my pacer, but mildly relieved physically, I soldiered on through along the picturesque riverbanks towards the crowds awaiting near the last few kilometers. Soon 32 turned to 33, to 34, and the end was in near. I paced for a while next to a young woman whom I am convinced was a local celebrity. Everyone was yelling her name “Elsa! Allez Elsa!” while no one was cheering for “Pirolli,” as my name was printed on my bib. I wasn’t too offended.

She fell behind at the water break but eventually caught up.

“Ca va?” I asked her, just to check in. She put her finger to her mouth, as if to shush me in a zen way, and we ran on. She eventually overtook me, beating my by one minute. The power of not speaking during a run...

The last few kilometers are the ones where you tearfully anticipate the end, when you can hear the announcer at the finish line calling out people’s names as they cross. I wanted it to be over but I couldn’t go any faster. After one more bridge to cross, a dip under an overpass, and a struggle up the other side, I could see the finish line, crowds cheering everyone over those last few meters.

I heard the announcer say my name, “Bry-AN Pee-Rohl-EE,” and I knew I had done it. I was a few minutes short of my goal, but I’m a bit young to peak too soon, so I took my medal and smiled. There’s always the next one. I saw Elsa at the water table. She asked me how I did, so I least I knew she could talk. We congratulated each other and the race ended as my high endured.

Back to the hotel, a quick shower, and then it was time to eat. To round off the perfect Lyon day, we did what anyone does when visiting the world’s gastronomic capital. We had hamburgers, and damn good ones at that.

Hey, I had just run a marathon, I could do whatever I wanted. The regional food could wait until dinner…