Paris Marathon Round 2: For the Love of Pizza 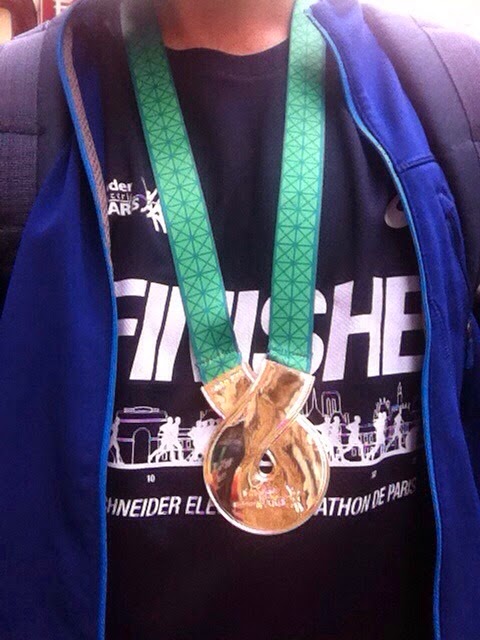 I was reading through a note book that I often take with me on my travels. During a daytrip to Luxembourg in 2009, while sitting on a terrace eating a pizza with a Belgian beer, I recapped my trip in about two pages. At the end of one page I scribbled, “PS train do a marathon, please.”

Little did I know how that would end up coming true, and then some.

Last Sunday was my second Paris Marathon, with some 40,000 people taking to the Champs Elysées and racing through the city’s streets. I’m back to normal after a couple nights of sleeping soundly and eating copiously (we ordered 8 pizzas after, they were finished within 24 hours). But oh what fun…

It all started with a 5:30AM wake-up call, some breakfast, some morning music, and then a quick metro ride with fellow marathoners to the corals. Rarely is there so much energy on a Sunday morning…

Exiting at the FDR stop, the crowd was there, just as I remembered from last year. The urge the pee began, and I excitedly joined other runners, peeing right by the Tiffany’s store with zero risk. I jumped into my very ambitious 3.5 hour coral, hoping to finish the marathon quickly and painlessly, only to pee again in front of onlookers as we approached the starting line. Inhibitions? Ha.

Then it began. The elites broke away, followed by the various speed groups. We shuffled forward and finally broke free towards Place de la Concorde with crowds cheering on both sides. Anne Hidalgo, the new mayor of Paris, waved from the podium. No turning back now.

The course was the same as the year before, with familiar characters dotting the way. Parisian firemen, international visitors, musical acts from across the city – the energy was pretty good. The first half, fueled by a few bananas and some water, left me feeling strong and fast enough. I knew that I needed to take it slow to pass people later.

After coming out of the Bois de Vincennes and hitting the Seine, thoughts started to creep into my head. “Stop, take a break,” my brain told me. “Shut up, shut up, shut up,” my legs said, eager to finish. I tried listening to a podcast for a while, but couldn’t hear with the crowds cheering – a good problem to have.

After a long stretch through a tunnel along the Seine, I walked for a few seconds, my mind playing tricks with me. I picked it up a bit and stopped again for more bananas and an orange slice, knowing full well that they would ruin my appetite for pizza later. By the time I found Heather at the entrance of the Bois de Boulogne (with honey and jam sandwiches!) I was nearing the end. I still had almost 10k to go, but the psychological effect of hitting single digit kilometers pushed me through, as did the sight of friends cheering along the way, and knowing that others were mixed in among the crowds.

This last stretch was where, last year, I was hurting pretty bad, and where I met a nice British woman named Becky who helped me run through it. This year, it wasn’t pain but just a bit of boredom that slowed me down. But by this time I was at least passing more than I was being passed, even if I fell horribly behind many in my sas de départ, many of whom had already finished. And the knowledge that seemingly endless amounts of pizza awaited me (after several weeks of gluten-free experimentation, you understand that this is a well-founded obsession) kept my feet moving forward.

But then mile 26 showed up on a sign and the world was right again. The crowds thickened as we exited the park, the cheers echoed, and the finish line made itself known. Those damned tears welled up again as I headed towards it, coming in just over four hours (again...ugh!) but happy to have finished. Then we feasted.
Next year the Paris Marathon will go to a lottery system, which I already entered, but in case I don’t ever get in again, I’ve already got two marathon medals out of this city. And isn’t that what’s really important here?