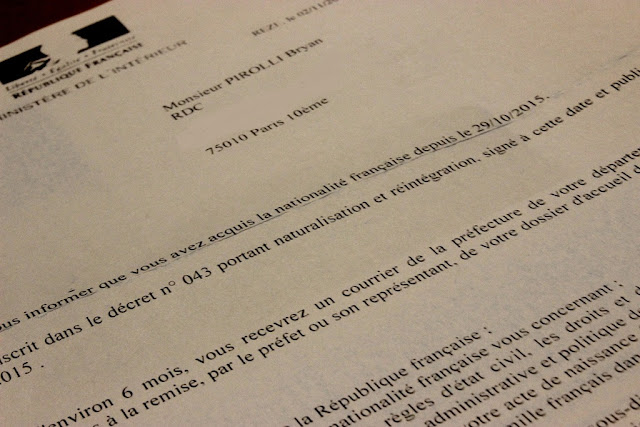 Where is Bryan? Recorded happily in the registry of French citizens. A young boy from Bucks County has grown up to be a naturalized Frenchman. Bring on the Champagne and baguettes, please!

My letter came last weekend in a simple little white envelope, as if it held all the weight and importance of a bank statement. France doesn’t splash out on notifying its newest citizens, but I’m not concerned. I’m part of the cool crowd at last.

I was waiting to talk about my interview in February, slightly afraid that I’d be jinxing myself. Honestly, however, I actually thought I had a lot more time to post it. But here it is, a recap of the final step on the way to French citizenship. I hope it helps anyone else out there going through the process!

So, after reading blogs and talking to friends about interviewing for French nationality, I thought it’d be a piece of cake. Everyone was saying they brushed up on French history and politics only to have an interview that was basically a conversation about their lives. Talk about myself? Easy peasy.

I show up at my interview at 10:45, to have a good 15 minutes of nervousness before my 11AM appointment. Around 11:30 my advisor calls me in, doesn’t shake my hand, and leads me to a little cubicle in the back of the office. The other advisors, visibly older than mine, worked in the friendlier, open-air part of the office. Here I was, in the corner, about to be interviewed for one of the most important pieces of paperwork I’ll ever have.

After fifteen minutes of shuffling through paperwork and providing all that she had asked for on my convocation letter, things got weird. She asked what I was studying, with no particular interest in my thesis or my courses that I teach at the Sorbonne – sort of my selling point. But OK.

Then the rapid-fire of questions began:

“Are most of your friends French?” – Um, mostly, they are an international mix though, with some from…

“The majority is French?” she interrupted – Yes, sure.

“What are you reading right now?” – Academic books, I’m writing a thesis.

“Name two French authors” – Derrida and Hugo? (Was this a trick question? I was writing a thesis at the Sorbonne…)

“What is the French motto?” – Liberty, equality, and fraternity (again, a trick?).

“What is its significance?” – Well on July 11th, Louis XVI fired his financial minister to the dismay of the people, so they took the guns from Les Invalides. Then on July 14th they went to get the gun powder which was stored at the Bastille, and…

“So the storming of the Bastille?” – Yes. I guess that’s enough.

“May 8th is a holiday in France, celebrating what?” – Um, the Armistice?

“What are some of the rights of a French citizen?” – Freedom of expression?

“What are some of the obligations?” – To respect and defend the flag? To sing the Marseillaise, well, not now I hope (she was not amused).

“Why do you want French nationality?” – I feel like France has treated me well and I want to participate as much as possible from now on, to really feel like a part of it.

“OK, well, all you need to do is bring me back this document for your auto-entrepreneur taxes and the dossier will be sent out, and on average the wait for a response is 6-12 months. It could be more, it could be less. Any questions?” – No I think that’s clear.

After trying to secure the tax document she wanted, and learning from the ever-friendly people at the tax office that it doesn’t exist, I started to realize that I may have gotten the trainee at the immigration office. She didn’t seem very aware or comfortable at all, like she hasn’t been doing this for very long. And to ask for a document that doesn’t exist? Yes I know this is France, but really?

In the end, I sent her the document later that day and asked her via email if it was OK. No response. I called at the end of the week and she responded, fortunately, and said it was fine. It was not a terrible experience, but not the fun and engaging conversation I had hoped. I feel that she left knowing nothing extra about me, and I never really got to develop my future projects – maybe she didn’t care, or maybe it wasn’t important.

Then the stressing continued for about nine months. But apparently I convinced here – and the rest of her colleagues – and now I’m officially French. More details will come about the rest of the process, but I’m on the books. Looks like I can forget about going to pick up my latest student visa next month…winning!