January 15, 2018
Naples is not a running town. The tiny cobblestone streets are adorable, but they aren't built for running. If the streets don't get you, the scooters or cars will. The past few days, in order to justify my pizza habit, I've been looking for places to get in a few miles.

So far, two options have arisen. The most practical is heading to the waterfront, down via Toldeo, until I hit the sea. It takes a while to get there, but it's the easiest option. I began running from Piazza del Plebiscito, past Castel dell'Ovo, along the park, and turning around around the Mergellina funicular station. Out and back, this allowed me to log about 5 miles. Hardly any traffic, calm on a weekday morning, and plenty of photo ops along the way if that's your thing.

The second option, tested today, is the park known as the Real Bosco (or Parco) di Capodimonte. This 18th century Bourbon Palace, now a museum, comes with a good chunk of land to run around. The trick, however, is getting there. You need to either take public transportation (out of my league) or walk quite a bit uphill before finding gone of the few porta to ge into it. I walked about 30 minutes from Piazza Bellini before I finally found some green space, but it was worth it. The above photo is the view before entering the park, as you walk the road around it in search of a porta.

All of this running, if I manage to make it out to either site again, is simply to eat all the pizza that I continue to eat. This week, a margherita (OK, two) from Dal Presidente was a winner. Bill Clinton made this place famous when he came here during a G7 summit in 1994. It was good. Not the best, but good. I'd go back, and very well may.

The beauty of takeaway pizza is that you can jazz it up at home if you're so inclined. I tossed on a bit of arugula (rocket for you UK speakers) which makes any pizza feel like a salad. A healthy, nutrient-filled salad. Right? 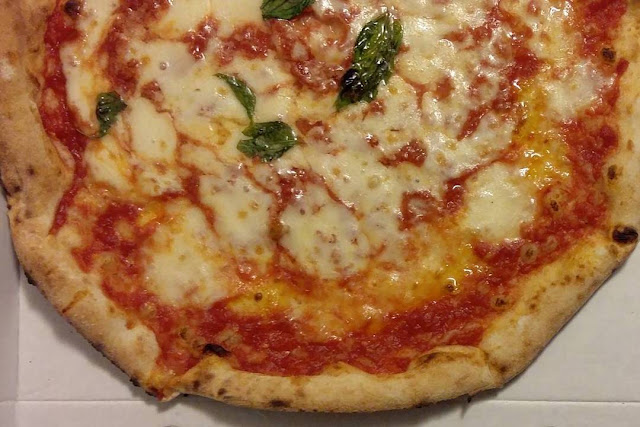 I also tried Pizzeria Donna Sofia where I ordered a pizza Romana on a whim. This is how I learned that the word acciughe means anchovies. It didn't ruin the pizza, but I wouldn't do it again.

I also learned the hustle on takeaway pizza. My pizza was €4.50 takeaway but €5 for eating in the restaurant. It said so on the menu, in black and white. I clearly said takeaway, yet he charged me €5. My Italian isn't good enough to argue, but I won't be fooled again. I've lived in Europe long enough to expect this sort of thing, but then again, it's just 50 centimes on a €5 euro pizza. It's hard to get too upset.

The only question now is where to get tonight's pizza...?