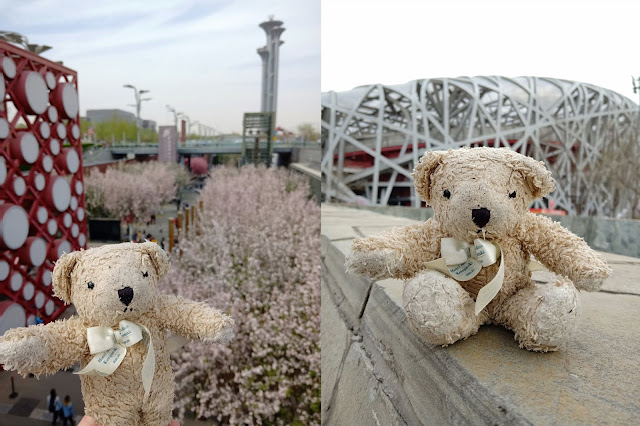 This bear, I tell ya, he gets around. Week 7, which feels like eons ago, took us to Olympic Park, site of the 2008 summer games. The Chinese were going bonkers over the blossoms on the trees, and I admit it was rather pretty. After a few photos, though, I felt the need to move on with my life.

We found the Bird's Nest, the iconic stadium, and Teddy posed like the ham he is. The park itself is underwhelming, apart from the blossoms, I guess, but it was fun to walk through and imagine all of the athletes and international stars who once walked the very same park. I have been in Olympic parks and stadiums before, but this one felt bigger, like Beijing was really trying to impress someone.


Later that week we met a new friend, who was one of the participant at the tour of the Mutianyu Great Wall. She invited me to her partner's home for a workshop on incense, something I know little to nothing about.

A little video about the experience...kitschy but, hey...


It was weird entering into a stranger's house and not really knowing why you were there, but, as we communicated through broken English and translator applications, the two of them managed to share all of their know-how about what they call "traditional Chinese culture." Tea, food, and incense were just a part of it, but they take courses about these things and then hold workshops in their home with friends and friends of friends in order to spread the knowledge.

I was skeptical at first, but they taught some actual history, explaining, for example, that incense once was used to mark the hours since they know how long it takes to burn. We had a good time laughing, eating dragon fruit and drinking jasmine tea. It was as Chinese as it gets.